Watched the movie FUNNY PEOPLE on last Thursday with my hubby and had wanted to blog about it. However, had too much on hand, especially my October E-Catalogue. Finally the E-Catalogue is launched, and I will like to blog about the movie.

When I decided to watch this movie, it was mainly because I am a great fan of Adam Sandler. So is my hubby. We had never missed a movie with him as the leading actor, since 50 FIRST DATE.

Unlike his other movies, there wasn't much advertisement and promotion on this Movie. But after watching it, we realized it was like the True Life Story of a Comedian. It shared about how a Comedian become successful and how they need to keep up with their 'funniest'. Most importantly, it exposed how much an actor has to lose to become famous. In exchange for fame and a luxury life, the main character had to lose the woman he loves the most. And somehow, the movie hinted that by keeping touch with your humane side, you actually can miraculously recovered from any sickness. But the sad part is, towards the end even when the main actor decided to relive his life, he can no longer be with the woman he loves the most, even when she loves him the most too.

Yeah! I guess most people won't care less about Comedies and not to bother to read into the morale of the stories. Most watched Comedies for a good laugh. But I realised all Comedies with Adam Sandler as the leading actor, has a morale of the story OR a message or more than one messages in the movie.

His very first Comedy which I remember watching, was THE WEDDING SINGER. And I had to confess that I didn't remember his name back then. But the movie left a good impression in my mind. And I always remember that curly hair actor with the funny voice. Hahaha...

Both me and my Hubby love the 50 FIRST DATE movie very much because it was a Romantic Comedy with a very touching storyline.

I remember Adam Sandler always makes us laugh and yet feel touched at certain scenes in his movie. He just had that THING about him which can make the audience laugh and cry at the same time. But of coz, he managed to get all the right movies too!

It tells of a man who was given the 2nd chance in life to undo what he had done wrong. The movie had a strong influence over me, because I was experiencing the same situation of sacrificing time with my then bf (now hubby) for my career. And eventually I realised that nothing beats spending time with your loved ones... Soon after my ROM, I decided to quit the job I was doing at that time and looked for a more Work-Life balance job. I even had the urge to give a copy of the movie to my then overworked boss, in hope he can find his life back.

What I am amused about Adam Sandler was also how he managed to make himself very FIT and MACHO in one movie and in the next movie, looked like a man in his 40s with a tummy. Wow...

Anyone who had seen MEET THE ZOHAN and HARRY AND CHUCKY will remember Adam Sandler six packed and good arms. But then in the next second, he became that 40 yr old Comedian in FUNNY PEOPLE.

Another movie I like very much was BEDTIME STORIES. There wasn't very much messages in the movie but it was a relaxing and touching movie with cute little children. It tells of how wild the imagination of children. And how we can make wishes come true as long as we wish hard enough...

Hee... Cheers to Adam Sandler~~~ And I hope there will be many more good movies by him ^^ 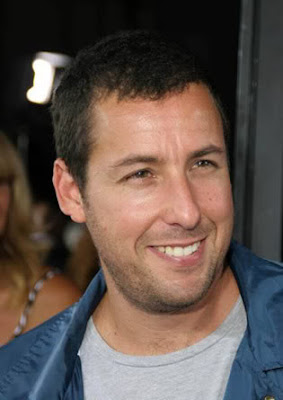 Posted by Jolene428 at 2:22:00 AM
Email ThisBlogThis!Share to TwitterShare to FacebookShare to Pinterest
Labels: iWatch, Neverland, Reviews