A Movie that triggers some thinking - Old Cow Vs Tender Grass 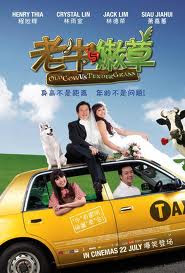 Guess most of you won't watch this movie?

I heard of friends who said they don't support local movies. And some who is anti-J team after the Jack Neo's incident. To me, I am pretty neutral about the incident. I always believe when something happen, both or all 3 parties were at fault. Anyhow, I didn't remember seeing the J-team sign in the movie.

But apart from it being a local movie, there may be other reasons for not willing to watch this movie. On the other hand, there are many reasons which enticed me to watch the movie.

One of which is, I am very curious what type of message will the movie be broadcasting?

And the brilliant part of this movie is that we are assuming the young SINGLE woman is RICH and the older SINGLE man is POOR. So when the young woman express fancy to this older man, the possibility of liking his money is not possible.

Okay, so how is it be possible for a younger pretty rich single woman to fall in love with an older, ugly, poor single man? After watching the movie, you will believe it's really possible...

1. The woman must have a hard-to-forget previous relationship, eg. the ex boyfriend died in an accident caused of her wilfulness.
2. The woman is super wilful and the man is super patient.
3. The man had never had a girlfriend before and hence he still has the 'first love is the best' belief and hence willing to do everything and anything for this girl unconditionally.
4. The man had seen worse women.
5. The man has nothing to lose because he is a lonely man with no family member left in this world. Hence spending time and money with this young woman makes him feel life is more meaningful.
6. The man is simple minded and easy to please.
7. The woman needs someone who is more mature to listen to her and to advise her.

With all these factors involved, it's definitely possible for an ugly older man to be with a pretty younger woman.