Jamie surprised me again last night by opening and closing her hands when I sang Twinkle Twinkle Little Star for her.

And I realized it's good to give tasks like such to Pyone too, because Jamie spent more time with her than with me. Thus Pyone is definitely the best person to teach Jamie certain things during their playtime together.

Most people prefer their helpers not becoming their 'friends', and most of the time, they may not even want to bring their helpers along for family day-outs. I guess we are quite different from the majority population. We believe in giving before we expect to receive.

But of coz, I don't deny, like most other employers, I had nightmares and crazy worries before Pyone joined the family. However, from the day she stepped into the household, I somehow just felt I can entrust Jamie to her. And so far, she has been performing well, learning fast and being very positive.

And I believe being positive doesn't only depend on the helper's personalities. It also depends on how she is treated by her employer and the other family members. If we treated her as if she is an outsider or with paranoid attitude, the helper will always feel that no matter what she does, she can feel belonged as part of the family.

The helper is going to spend a good 2 years or even more with the family. If she can never feel belonged, it's definitely not a good feeling. I guess it's the same when we work for an employer who never really treat us as part of the organisation. Soon or later, we will want to leave the organisation right?

But of coz, there are definitely black sheeps around in the foreign helper industry. However, we should always keep an open mind that we may be the next lucky one to get a good helper afterall :D And as long as we treat them fairly and shows them that we can trust her, I believe she do her best in all her tasks.

Anyway, I was teaching Jamie the alphabets and number charts on the wall, when Jamie suddenly burst out crying. I did not know what was the reason, until I opened the fridge and she pointed to a direction. I then realized she misses her ice cream (baby yogurt).

Last week she had a good supply of the baby yogurt so I did not buy new ones during our grocery shopping day over the weekends. But this week, there aren't any left. And when I taught her the word 'Ice cream', she seemed to be reminded that she has no more ice cream left.

Just now I brought her to Thomson Plaza NTUC Finest to buy her 'ice cream.' When Jamie saw the 'ice cream', she started to make a lot noise to indicate that she wants the 'ice cream'...

This is a picture of a banana favour yogurt she ate earlier on... 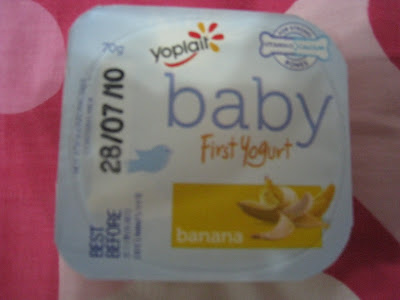 The baby yogurt comes in 6 in a packet with assorted favours - vanilla, banana, pear and peach :D I tasted it myself and think it's very nice.

She is really getting cuter everyday~!!!
Posted by Jolene428 at 11:50:00 PM
Email ThisBlogThis!Share to TwitterShare to FacebookShare to Pinterest
Labels: DayOut, Family, MyKidz, Parenting, Supermum