Godzilla - Take home more than you thought you will

I was hesitant when Laogong wanted to watch Gozilla last night. But it had been weeks since we last watched a movie together and it would be another week before Xmen is out. I knew Laogong just wished to spend some couple time. Afterall he was much neglected every day as the kids will take turns to fight for my attention. 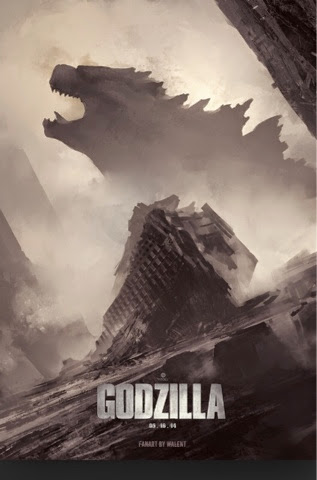 I wasn't able to guess the storyline from the poster. I think that's the cleverness of the marketing agent. Coz by not releasing the thrillers, makes audience curious and they may walk into the cinemas to find out for themselves.

The movie released at the right time too. A good "getaway" from the two superheroes movies.

True enough, it was more than I expected.

1. The graphic was great.
2. Fighting scenes were not lame.
3. It was not just about Godzilla.
4. Godzilla was not the villain.
5. The morales of the story were very meaning:
a. By not letting go of the past doesn't always mean it's a bad thing or doesn't always mean the person involved is crazy or having a depression. The obsessiveness that comes with it (due to a sad past), may turn out to be in good use or for a good reason.
b. Don't run away from your fears, face it!
c. Treasure your loved ones who are still alive.
d. Believe in your loved ones.
e. Feels that the 'I will save my loved ones by doing whatever it takes to  save the world' spirit of the main role is similar to those Japanese animes I watched. I remember in those animes, the lead roles is always enticed to save the world so that he/she can save his/her loved ones. It's the love for his loved ones that gave him the faith and strength to go against such an enemy which is so much bigger and more powerful than humans.
f. 斩草不除根，春风吹又生 - Be farsighted by getting rid of every potential threat for future invasion.
g. The 'truth' may not be necessary true. But if we want to know the real truth, we must make sure we are capable to cope with it.
h. Don't play God and try to control nature. We may have to pay a big price for being Kay kiang when we don't have the technology to deal with a stronger enemy.

But of coz the movie is not perfect too. There are some really lame pointers about the movie:
1. I cannot help but think the Mutos looked like huge cockroaches. Hence I cannot help but want to laugh during the fighting scenes.
2. As usual, the movie talks about heroic acts of American soldiers.
3. I don't understand why Godzilla is the good guy and why 'God' sent a monster to restore course of nature? There seem to be an understatement in the movie. Tell me if I am wrong.
4. Confusing the history. So war world 2 is all about fighting Godzilla and Mutos?
5. I think movie is indirectly asking all countries not to have nuclear weapons or weapons with radiation or else the Mutos will look for you! Lolz...

Yes, you will hear wooohooo and laughter in the movie. Not a bad one t watch to relax from your hard day at work (at least to us).

So catch it if you have time before Xmen is out ^^

Posted by Jolene428 at 7:18:00 AM
Email ThisBlogThis!Share to TwitterShare to FacebookShare to Pinterest
Labels: iWatch, Movies, Neverland, Reviews