My nice MIL had made corn soup specially so that we can use the corn soup in Jamie's porridge. So Jamie had Corn Soup-based Porridge with Carrot and Potato for Lunch on Sunday.

On Monday I used Pork for the soup base instead. And added fish in too. Realized there is this fishy smell in the porridge. Wonder if it's normal. Any advice to remove this fishy smell? Anyway Jamie still finished a bowl at Lunch and 3/4 of a bowl for Dinner.

She also had a new snack in the afternoon. She finished two pieces of Baby Bites - Carrot Favour. Wow... She must have gotten used to the taste of carrots because I added carrots in almost all her meals.

Why ah? Frankly, I am very worried she become a Da4 Jing4 Shi4 like me. Hence I hope by eating more carrots will reduce the possibility of her ending up with thick glasses.

Ohh, I let Jamie tried the Teething Rusks from Heinz too but I guess maybe it's coz she hadnt had teeth yet hence she don't really enjoy sucking or chewing the teething rusks.

She tried the Apple and Cranberry Cereals the other day too. It was kinda of sweet, but she didn't like it that much. I realized she prefers brown rice cereals to white rice cereals. Maybe that's the reason, other than being too sweet. I guess I can introduce this fruity favoured cereals for snack time or breakfast next time. 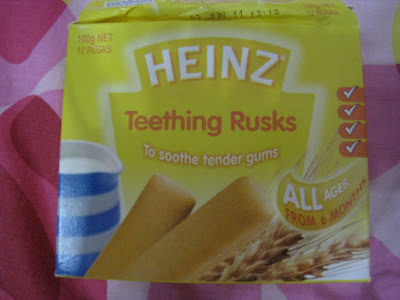 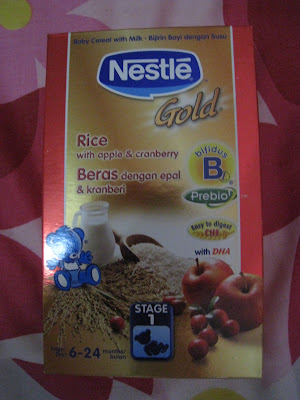 Tried my new slow cooker today and find it really easy to cook for Jamie :) Think I am quite inspired to introduce new things into her diet slowly :)
Posted by Jolene428 at 1:31:00 AM
Email ThisBlogThis!Share to TwitterShare to FacebookShare to Pinterest
Labels: MyKidz, Neverland, Parenting, SAHM